﻿The Hermanas Unidas logo is the Quinto Blossom. The blossom tells the story of the Hermana. This is the story of a young woman, her face in profile depicted by the leaf and
stem of the logo. This woman is on the path to enlightenment, through the pursuit of education, symbolized through the winding stem, which also represents the winding, challenging, yet rewarding road towards personal growth. Her path leads to el Quinto
Sol, this is the fruit of her sacrifice, the sum of her experiences, the rewards of the relationships that she has built. This is the story of the Hermana that blossoms into a woman of truth, a better woman for having traveled that road. El Quinto Sol remains the focal point of our logo so that we may never forget where we came from and that we may keep clear where we are going...together in hermandad.﻿


Our colors are ﻿BLUE﻿ and SILVER

Hermanas Unidas was founded in University of California, Berkeley in the fall of 1994 by five young ladies: Zulyeka Heredia, Ricki Robles, Amelia Schustz, Erica Solorzano, and Bernadette Vargas.  (B. E.. A... R.. Z..)

We celebrate our birthday on April 12 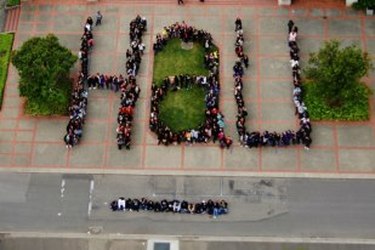 ​HaU Statewide Conference (2012)
There are 18 chapters across California, Check Them out below!